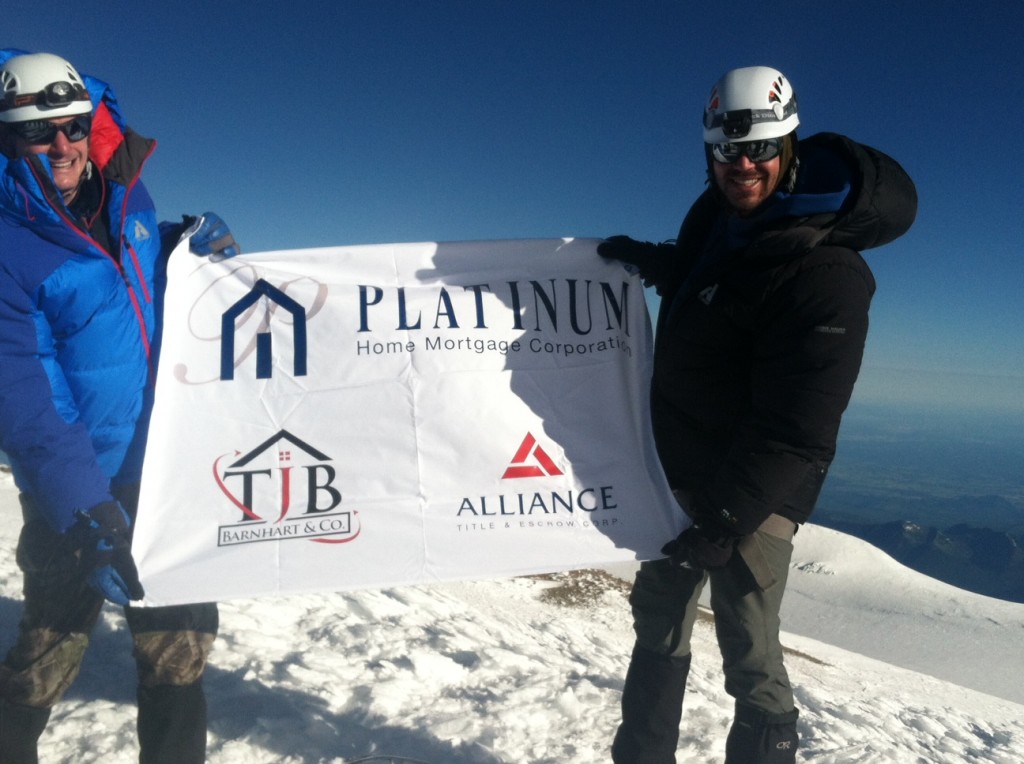 T.J. Barnhart (Keller Williams) and Jared Janke at the summit of Mount Rainier.

“About 7 months ago, a group of friends and colleagues got together to discuss the possibility of summiting Mount Rainier. As a part of that group, I thought that sounded like a great challenge and definitely bucket list worthy so I was in! I began training for the summit climb pretty extensively in February and also started a diet to lean out a bit to get in better shape for the climb. I started the caveman diet, also known as the Paleo diet, which allowed me to cut about 15 lbs. For the training aspect, I climbed our local Canfield Mountain 8 times to the tower, trying each time to beat my previous time. I also was fairly religious about hitting the gym. I would load my hunting pack with about 45 lbs. of weight, throw it on my back and then hit the stair climber for about 30 minutes at least 4 times a week.

That being said, I still had no idea what I was in for!!!! We took off on June 27th for the mountain. When we arrived at Ashford, WA, we met our guide for the trip, gathered all of our required gear, had a gear check and then a 30 minute orientation about what to expect during the climb. The amount of gear was mindboggling to me. It was a list of about 30 required items – 5 layers of clothing, helmet, harness, headlamp, boots, crampons, 3 sets of gloves, ice axe, ski poles, and a sleeping bag, just to name a few. All of these items, including your food and water, are packed into your pack. Total weight of the pack was roughly 55/60 lbs. loaded.

Next day was training day on the mountain. So we all jumped in a shuttle and headed to Paradise, WA which is at the base of Mount Rainier and the Muir snowfield. This was a fun day because we got to put all of our stuff on, learn its uses and play around on the mountain. Learned most of our survival skills and mountaineering skills on this day. Self-arrest and team-arrest were the essentials. Using our ice axe when falling, etc. After a nice day, we headed back down a little sore and tired but excited.

The next morning we were meeting at the guide lodge with all of our gear packed and ready to go. The plan was to climb to Camp Muir at the top of the snowfield base of the summit of Rainier where we would arrive, eat, rest, sleep get up and take on the summit. That was the plan anyway!! Climbing to Camp Muir was challenging. The average degree of climb was 20% grade in snow with a 60 lb. pack on your back and the climb took us about 6 hours. We arrived at Camp Muir pretty tired and worn out. It was about 4 pm when we arrived and our guide came in to the hut and explained that we needed to sleep and that he would come wake us at midnight to begin our ascent of Rainier. The hut we stayed in was just stacked up bunk beds in a tiny area. I got absolutely zero sleep – couldn’t sleep due to excitement and others snoring. When our guide came in to wake us, I was pretty delirious but ready to give it a go. So I strapped on all my gear and met our guide outside of the hut.

It was a beautiful night – clear, fairly warm for up there (about 30 degrees) and full of huge stars in the sky. We were quickly separated into 3 rope teams. My rope team consisted of a rope guide, myself and one other. So we roped up and started out! Our route was explained to us beforehand, but nothing could have explained what it was really like. Climbing in the dark for the first couple breaks was intense. The summit climb had an average climb grade of 45-50%, so you can imagine the difference even from the Muir snowfield climb. We took 3 breaks before reaching the summit, each after about an hour and a half of intense technical steep climbing, by using rope anchors tied to the mountain that we put in, etc. Lots of life or death situations where you had to focus. After leaving at midnight on June 29th, we summited Mount Rainier at 6:50 am on June 30th. We were the first team to summit since June 20th – 9 teams before us were unsuccessful. Getting to the top, signing the summit book, and looking at the views was unreal and one of the greatest feelings I have ever experienced. We spent about 45 minutes at the summit before our descent back to Camp Muir, then down to Paradise and back to the lodge. Going down was exciting, nerve-racking, dangerous and challenging to say the least. It took us about 6 hours to get back down off of the mountain safely and back to Muir. Then, from Muir, it took us another 3 hours to get down to Paradise.  16 hours of climbing in a 24 hour period was intense!!

When this trip was done, I felt a sense of accomplishment like never before. It was the hardest thing I have ever done before but well worth it!! If anybody is looking for a life changing, super-challenging, but very rewarding experience, then Mount Rainier is for you – go for it!! 14,410 feet to the top and views like you will never again see in your lifetime!! As for me, I will root you on from home. This will be my last climb, but jeez it was worth it.”