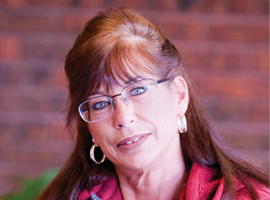 Corrinna Schnepf is a Production Typist for the East Idaho Production Unit in Alliance Title’s Rexburg, Idaho office. Her duties include typing title commitments for several counties and typing policies. What she enjoys most about she does is working with the Title Officers and Title Assistants in the branch as well as learning more about the title industry. Corrinna says, “It helps that I enjoy typing, especially those nice long and lengthy legal!”

Corrinna started with Alliance Title through an employment agency in April 2002 as a Customer Service Representative/Receptionist in the Idaho Falls, Idaho branch. In October 2004, she was hired permanently and worked her way up to a Production Typist. In August 2011, Corrinna and her husband, Chuck, moved to Tennessee for a change of pace and to be closer to Chuck’s brother. In July 2012, after a lengthy illness, Chuck passed away. Corrinna then moved back to Idaho Falls where she learned that a job opening for a Production Typist in the Rexburg branch was available. She immediately applied and happily rejoined the Alliance Title family.

Her favorite Alliance Title core value is teamwork. Corrinna explains, “Without good teamwork, it is hard for an office to succeed.”

When asked who she admires and why, Corrinna says, “The men and women of our military and for all that they do for us to have our freedom. My husband served in the military during a time that was not so kind to those returning from Vietnam. The men and women that serve, and those who have lost their lives for us, deserve the upmost respect and appreciation from all of us.”

Outside of the office, Corrinna is an avid reader. She enjoys doing needlework, cooking and grilling, being outdoors, working in her garden, walking the greenbelt, and playing with her Alaskan Malamute, Thunder. Corrinna is also a big football fan, particularly the Oakland Raiders, and she is a NASCAR fan.