Comparing February 2012 to February 2013, the refinance bubble remains strong in the midst of a growing resale market. Last year in February, 43 recordings for Existing Home Sales were in place. This February, 54 recordings were made – a 25.5% increase over last year. Last February, there were 132 recorded refinances. Amazingly, this year that number went up to 136 recordings. The percentage of refinances declined amidst a growing field of sales, but the actual numbers continued to escalate.

Overall in February, 25.96% of the recordings were Resale, 65.38% were Refinances and 8.17% were Agricultural/Commercial transactions. Total recordings were up 10% from 189 to 208 for the month. Another good indicator of growth for Twin Falls. 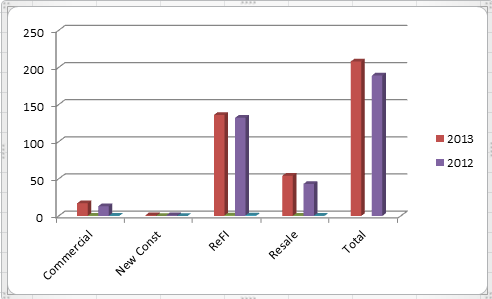