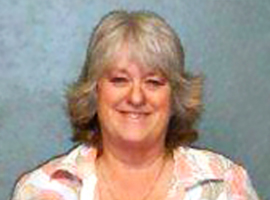 Laurie Santee is an Escrow Officer for Alliance Title’s Salmon, Idaho branch and has been with the company since May 1984. During her career with Alliance Title, Laurie has also worked as an Administrative Assistant and Long Term Escrow Officer. What she likes most about what she does now “is working with the numbers and working up closings and funding.”

With almost thirty years under her belt in the title insurance and escrow industry, Laurie has seen many changes in how closings have been facilitated throughout the years. Laurie explains that “back in the day” she had to cut tiny pictures of film and insert them into a plastic sleeve for her viewers. And, before overnight mail became popular, she recalls when the branches used carbon paper for copies, which she says, “It certainly was cause for concern when we had to redo a Settlement Statement. Thank goodness for White Out.” Without fax machines, cell phones or copiers, Laurie says “that closings took more time than they do now.”

Laurie’s favorite Alliance Title core value is teamwork as she believes that she and her fellow associates are a team. She also says that her favorite saying with Alliance Title is:  “My job is finding a way to say yes.”

In her spare time, Laurie loves working outside with her flowers. She has three dogs and three cats who love to follow her around, making sure that Laurie plays with them as they go. She also loves to crochet, travel and spend time outdoors. Laurie is a member of Beta Sigma Phi Sorority, is a PER of the Salmon Elk’s Lodge, and is a member of the 5 Valley Dahlia’s and Glad Society of Montana.